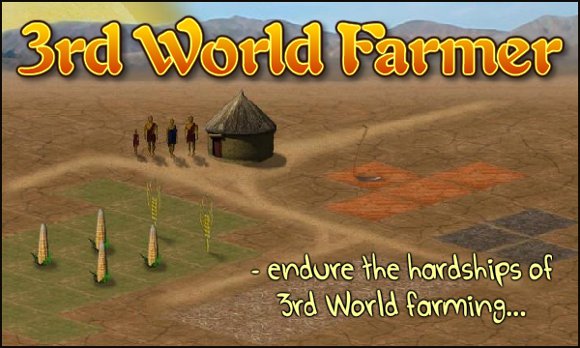 What is 3rd World Farmer?

3rd World Farmer is a new kind of game. An experiment in the genre of Serious Games, it simulates some of the real-world mechanisms that cause and sustain poverty in 3rd World countries.

In the game, the player gets to manage an African farm and is soon confronted with the difficult choices that poverty and conflict can cause.

As a farm and family management game it has an emotional impact on many players because usually these types of games play out in much easier settings, where it’s always possible to prosper by playing cleverly and making the right game choices. It’s not always like that in 3rd World Farmer. Just like real people are dying from starvation in desperate situations that they never asked to be put in, all it takes for things to go wrong in this game is one bad harvest, an unfortunate encounter with corrupt officials, a raid by guerillas, a civil war, a sudden fluctuation in market prices, or any of the many other game events, that might never happen to families in industrialized countries.

By letting players experience this – albeit in a harmless, fictional setting – we hope to open their eyes to the problems and to motivate them to make positive social change. Our aim is to have everybody play the game, reflect, discuss and act on it. The game is a great starting point for discussions of 3rd World issues, so we encourage teachers to use it in class.

Although the current version of the game is finished and fully playable, our work to improve it continues.

The story behind 3rd World Farmer

The first prototype of the game was developed as a students’ project at the IT-University in Copenhagen, Spring 2005. All initial participants were actively involved in shaping the original concept to a playable game. Actually, the very most of the game features have been discussed by the entire group until a fitting solution was agreed upon.

The positive evaluation and feedback from user testing inspired some of us to continue developing the game and to publish it online in new versions. Our work to shape the prototype into a fully playable game has involved meetings and correspondence with relief agencies and game industry professionals.

Second prototype was developed by Frederik and Ole (programming) and Benjamin Salqvist (artwork).

The release of November 23rd, 2006 was the result of extensive redesign based on feedback from people at our forums and elsewhere, managed and implemented by Frederik with some cool new graphics by Benjamin.

The release of November 2008 includes Spanish translation by Cristian Selman, implemented by Frederik.

The 2014 release featured many small updates including a new highscore system, implemented by Frederik.

In September 2018, Chinese localization was added along with a number of new annual events.

The November 2019 build, which was long available primarily on a separate preview page, included Turkish translation and adjustments to game balance.

With the End of Flash in January 2021, the current HTML5-based version of the game was launched. Unlike Flash, HTML5 is based on javascript and thus supported by most modern browsers, making the online game version playable for the first time on devices such as iPads and Android tablets.

If you’re interested in helping us translate 3rd World Farmer into your own native language, feel free to contact us.

3rd World Farmer ported to HTML5! A final goodbye to Adobe Flash Player, which did serve us well for 16+ years. And a welcome to JavaScript and the Phaser3 Framework for html5 game development.

Small update on the website today: Now we're showing both weekly and all-time top scores on the leaderboards!

3rd World Farmer in good company with other economics-themed serious games on ChangeGamer. Student activity for the game included in pdf and doc formats.

3rd World Farmer is one of many teaching tools listed on Educade.org by GameDesk and At&T. We definitely recommend exploring this great resource - and if you're a teacher, please go ahead and share your lesson plans for 3rd World Farmer.

The School of the Madeleine in Berkeley will be inviting students to explore 3rd World Farmer for this year's Digital Learning Day. We hope the game will inspire some good discussions.

We're proud that 3rdWorldFarmer is on DailyGood's list of games that aim to change the world. We've talked about some of these games earlier on our facebook page, but some may be new to you. Play 'Garbage Dreams' and learn a bit about recycling in Egypt. Or 'Fate of the World', which sure looks very interesting too.

With the translation into two new languages, Brazilian Portuguese (by Ricardo Pereira Filho and Rodrigo Dias) and Hungarian (by Adam Steer), 3rdWorldFarmer is now available in the native tongues of some additional 260 million players! :)

This update also includes a number of smaller gameplay tweaks and improvements to the interface, such as multi-planting and highlight markers.

With the translations earlier this year into Czech (by Martin Truhelka) and French (by Marco Bertolini, Yasmine Kasbi, and Simon Bachelier) 3rd World Farmer is now available in 7 languages :)

If you would like to help us translate the game into additional languages, please let us know.

The site got a brand new webdesign, by Frederik.

¿Hablas español?
3rd World Farmer has been translated into Spanish by Cristian Selman from Chile. Cristian is also the author of these two articles on educative simulations that teach economics:
(link 1) (link 2)
Thanks for the effort!

Site closed down by webhost. Too much traffic. Various mirrors up. No forums, to avoid server strain.

Official site up at new webhost.

Site down because of massive traffic from www.fark.com

We were mentioned at www.fark.com!
Cool :)